The question of human rights violations of workers in Qatar

The question of human rights violations of workers in Qatar
Luca I.

The 2022 FIFA World Cup, hosted this year in Qatar, is fast approaching, and with it increasingly more allegations regarding the human rights violations of workers in the country (Dougall). Football fans in Europe have rallied around the message “Boycott Qatar 2022,” and influential players such as Philipp Lahm revealed that they wouldn’t be going to the World Cup. Campaigns such as these have the goal of publicizing the rights of communities such as migrant workers and women in the country (Dougall). 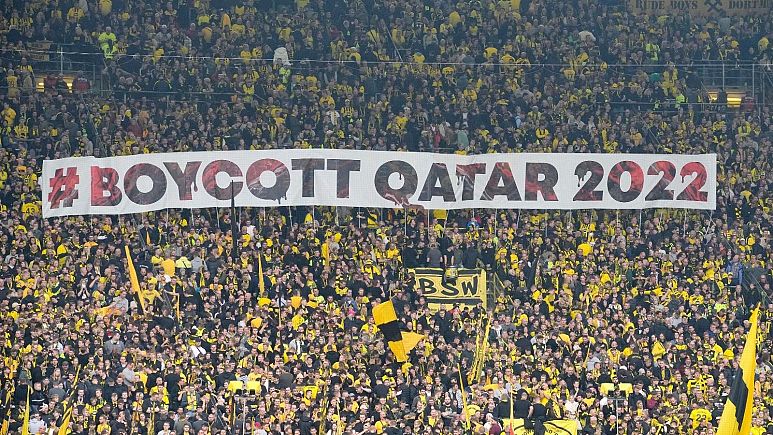 Fans in a German Bundesliga match between Borussia Dortmund and VfB, October 22, 2022.

One of the most criticized aspects of workers in Qatar is the kafala system. This is a sponsorship system, giving private citizens and companies located in Jordan, Lebanon, and the majority of Arab Gulf states complete control over employment and immigration status for migrant workers. Supporters of this system argue that it creates cheap and abundant labor to support an era of economic growth, benefiting local business and growth. However, since this system is not under the jurisdiction of labor ministries but rather interior ministries, workers have little to no protection under the labor laws of the host country. This is significant, since workers are left vulnerable to exploitation by their employers and have difficulties entering labor disputes or entering unions. Most of the workers under the kafala system come from Africa and South Asia, and work in industries such as construction or domestic work, and often earn less than locals. (Robinson).

One of the main condemnations of this system is that it opens the way for “modern slavery,” and workers face numerous abuses. For instance, employers have the freedom to confiscate personal items such as passports and phones, confining workers and restricting their movement. Furthermore, workers are said to be deceived and coerced when signing contracts, often in languages they do not speak. There is vast discrimination against migrant workers, with South Asian and African workers often subject to racism and female workers facing abuse and sexual violence (Robinson)

Overall, there is a lot of concern and controversy regarding the treatment of migrant workers in Qatar. IMUN will assess and debate the ongoing situation and develop possible resolutions to benefit all parties involved.